Abdulrazak Gurnah, By The Sea

„In the late afternoon of November 23rd, Saleh Omar arrives at Gatwick Airport with a small bag in which lies a mahagony box containing incense – and little else. He used to own a furniture shop, his own house, and be a husband and father. Now he is an asylum seeker from paradise, claiming silence as his only protection.
Meanwhile, Latif Mahmud, poet and professor, voluntary refugee, lives quietly, alone in his London flat, bitter about the country and family he has never revisited.
The paradise both these men have left is Zanzibar, an island in the Indian Ocean swept by the winds of the Musim, bringing traders with their perfumes and spices and a unique mix of cultures and histories. When Saleh and Latif meet in a small English seaside town, a story of long ago begins to unravel – a story of seduction and deception, of the haphazard displacement of people, a story of love and betrayal and above all of possession. And as the story unfolds, we see a country exploding into postcolonial independence, reeling in its attempt to find stability while its people are caught in the maelstrom of their times.“ 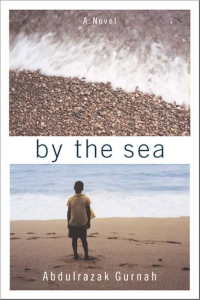 Du siehst: Abdulrazak Gurnah, By The Sea €24.00
In den Warenkorb