„When Laurence Waters arrives at the small rural hospital in a South African homeland where Frank works, Frank is immediately suspicious. Everything about Laurence grates on Frank, from his smoking in their shared room, to his unfamiliar optimism about what the doctors can truly accomplish among the local population—but Laurence seems oblivious, immediately and repeatedly declaring Frank his friend despite the other’s indifference. Frank originally came to the hospital to get his bearings after his wife left him for his best friend—but denial of the higher-level post he was promised when he came, and the disillusionment of working at a completely ineffectual hospital (it’s always deserted, an entire wing closed off and gradually being looted of any reusable equipment lacks basic supplies), has hardened him into cynical apathy—which makes Laurence’s optimism all the more irritating.“ 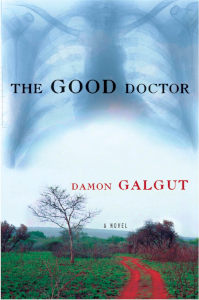