„In Snakepit, Isegawa returns to the surreal, brutalizing landscapes of his homeland during the time of dictator Idi Amin, when interlocking webs of emotional cruelty kept tyrants gratified and servants cooperative, a land where no one–not husbands or wives, parents or lovers–is ever safe from the implacable desires of men in power. Men like General Bazooka, who rues the day he hired Cambridge-educated Bat Katanga as his “Bureaucrat Two”–a man too good at his job–and places in his midst (and his bed) a seductive operative named Victoria, whose mission and motives are anything but simple. Ambitious and acquisitive, more than a little arrogant, Katanga finds himself steadily boxed in by events spiraling madly out of control, where deception, extortion, and murder are just so many cards to be played.“ 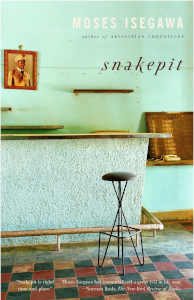